The US manufacturer SLD Laser has launched the first white light chip with a switching function.  On command, it transforms into an IR emitter with 905nm and 850nm.  Both light sources are housed on the same 7x7mm chip.  SMDs are also available with a starboard to facilitate mounting onto the circuit board.

With a luminous flux of 450 lumens and a luminance of 1000Mcd/m², the LaserLight SMD W-IR offers all the advantages of LaserLight white light technology, such as a long range and narrow beam angle, even in this dual function.  The IR wavelengths are emitted with an output power of 250mW.

The IR wavelengths of the SMD W-IR are mainly used in motion sensors, night vision cameras, and other professional security systems.  This new development opens up numerous application possibilities.  Instead of placing motion sensors and lighting in two different components, one element can perform both functions.  For example, a surveillance camera automatically illuminates the corresponding area as soon as it detects something suspicious.

This chip is distributed in Europe and the USA by Laser Components. 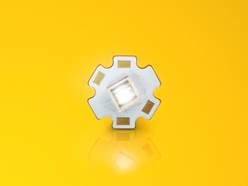